As with most things, I went for the corpses.  At least that’s how most of my trips start   – some death thing that I absolutely must see combined with SkyScanner dolling out the cheap flights.  Vienna may not have always been on the bucket list but then I found out they had a mortuary museum and were home to an anatomical venus and next thing I knew I was looking of places to eat while I was over there. Because if there is one thing Vienna is known for other that its special relationship with the dead is coffee and cake. Vienna: cake or death? Why not both? 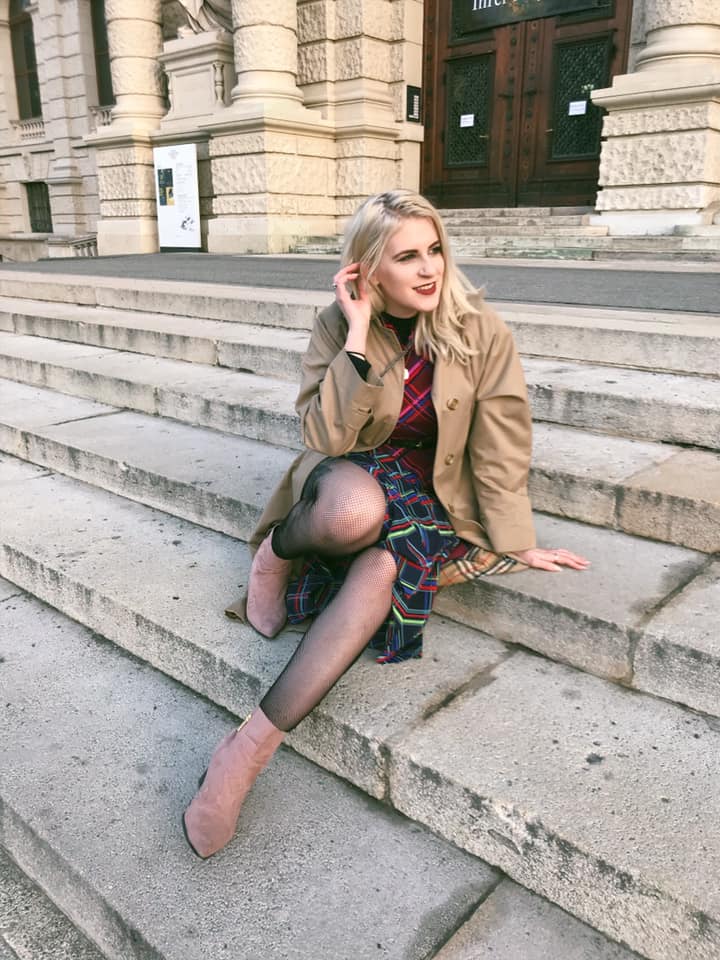 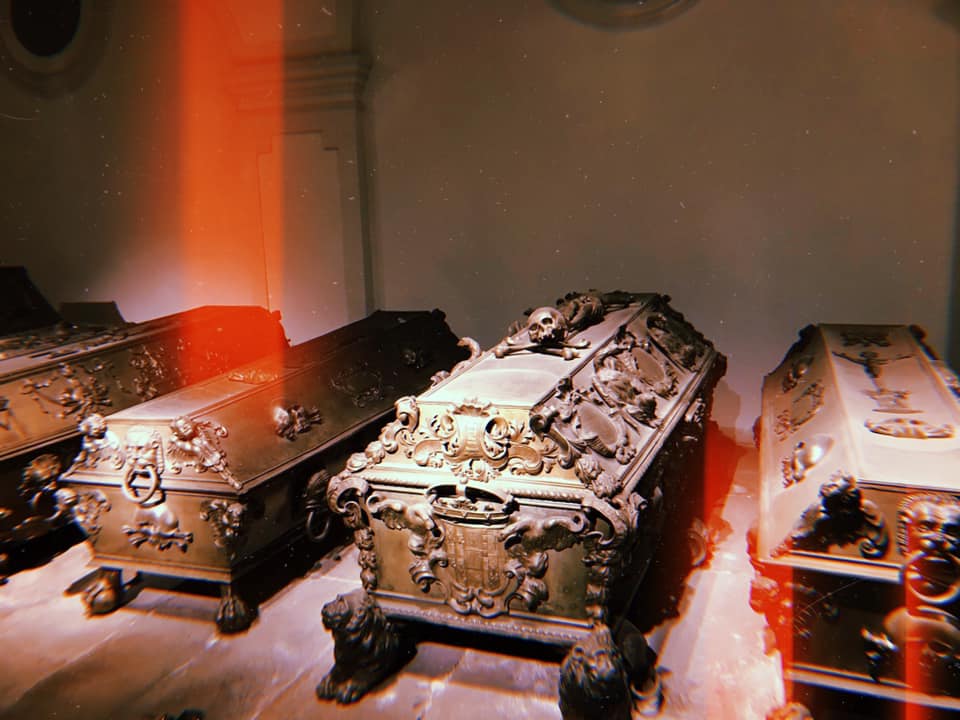 Start as you mean to go on by going underground to hang out with some bodies.  While the Stephansdom Crypt isn’t on the scale of the Parisian catacombs, that and the Hamsburg Imperial Crypt are well worth the visit for any death enthusiast (there is no way to type that without sounding like a full blown creep, so I’m not even going to try at this point.)   The Stephansdom tours are guided only and involve going under the Church to various crypts housing organs of some of Vienna’s most prominent historical figures including Maria Theresa.  For so long I thought the process of mummification and taking out the organs for the old organ jars was strictly in the domain of the Ancient Egyptians, but then you’re next to the embalmed entrails of a European empress and it’s a whole different ball game.  The Habsburg Imperial Crypt feels like a sister attraction as it is home 143 of Hapsburg royalty and some elaborate sarcophagi. If you’re in to your memento mori imagery (guilty) then this is going to be your bag.   A melancholy mix of celebration, grandeur and Viennese history, do try see these back to back. 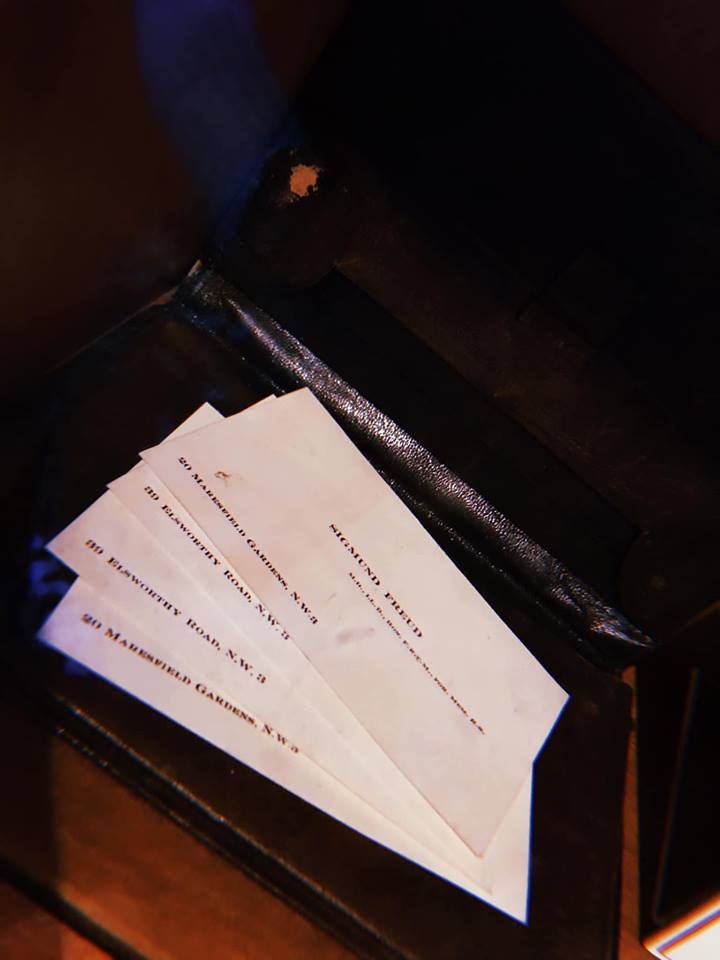 Anyone with a passing interest in Psychology should make the pilgrimage to the home and office or the Granddaddy of modern psychology Sigmund Freud.  If you’re looking for drama and flair you’re not going to find this here. However if you are interested in historical artefacts and have a good few hours to settle in with the audio tour this is something worth adding to the list.

Confession time. I didn’t fully get to experience everything the Narrenturm had to offer. Home to one of the largest wet collections in Europe, and I didn’t get beyond the first floor under the misguided conviction that it all seemed a bit “under construction.” I was disastrously wrong.  The building itself is pretty cool – one of the oldest former mental asylums and as an oddity worth the visit alone. That said, take the guided tour, don’t trust the online opening times and let me live vicariously through you.

A note on the Josephinum Medical Museum

This was top of the list.  The Josephinum is home to an anatomical venus – a anatomical wax work and learning tool from the 1700s. I’m not saying seeing this was the only reason I was going to Vienna but well, it was pretty close to the top. As of February 2019 the Josephinum is currently closed for the next few years for tourists while it undergoes redevelopments.  Will I go back? Strong maybe. Should you plan your entire trip around seeing an old timey medical tool? Maybe not. 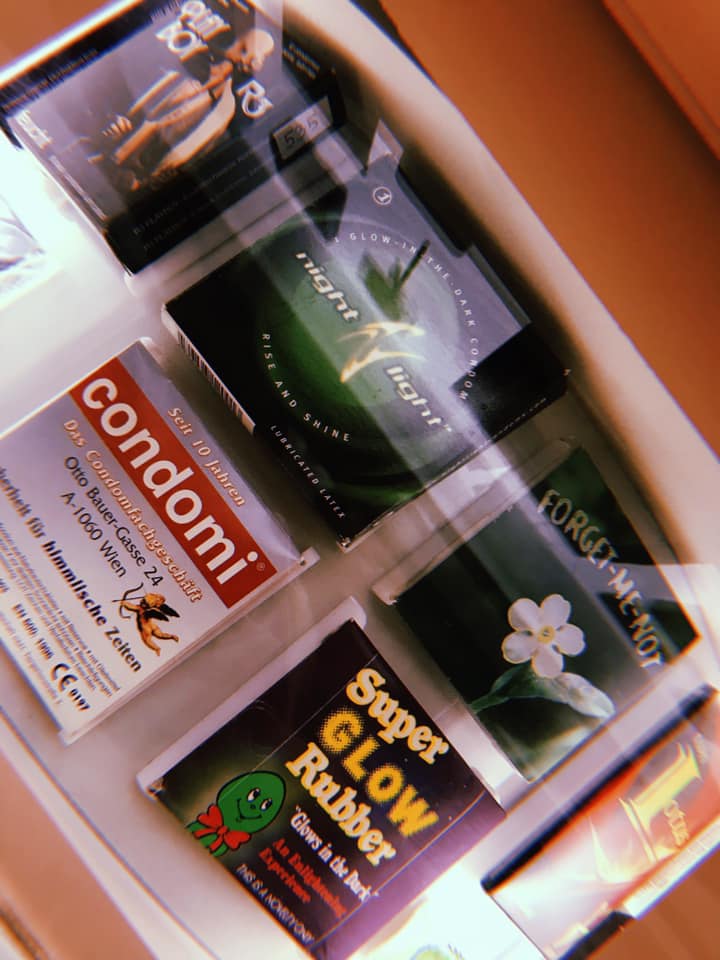 Museum of Contraception and Abortion

Did you know that women use to douche with coca cola? Or that courtiers blew up condoms like balloons just for fun? Me either but I’m not surprised. The Museum of Contraception and Abortion is tiny, packed tightly in to two small rooms but it packs a punch in the density of information. From frogs being used as pregnancy tests (yes really) to a brief history of abortions across Europe, I’ve never felt more grateful for the fact that I have access to free, safe sexual health care and hammered home the necessity for access for contraceptives and abortions for all.

If you’re going to the Belvedere odds are you’re going for the Klimt.  It’s like going to the Uffizi for Botochelli.  And while popular art seems like it’s saturated by being in university dorm rooms, it doesn’t make seeing his work in the flesh any less affecting.  Prints are great but seeing art in person really lends to the scale and detail often lost in translation.  Of course the Belvedere also is home to a mix of the surreal, sculptures and is the kind of place you could easily lose an afternoon in.  Seeing Judith though was worth the entry price alone. 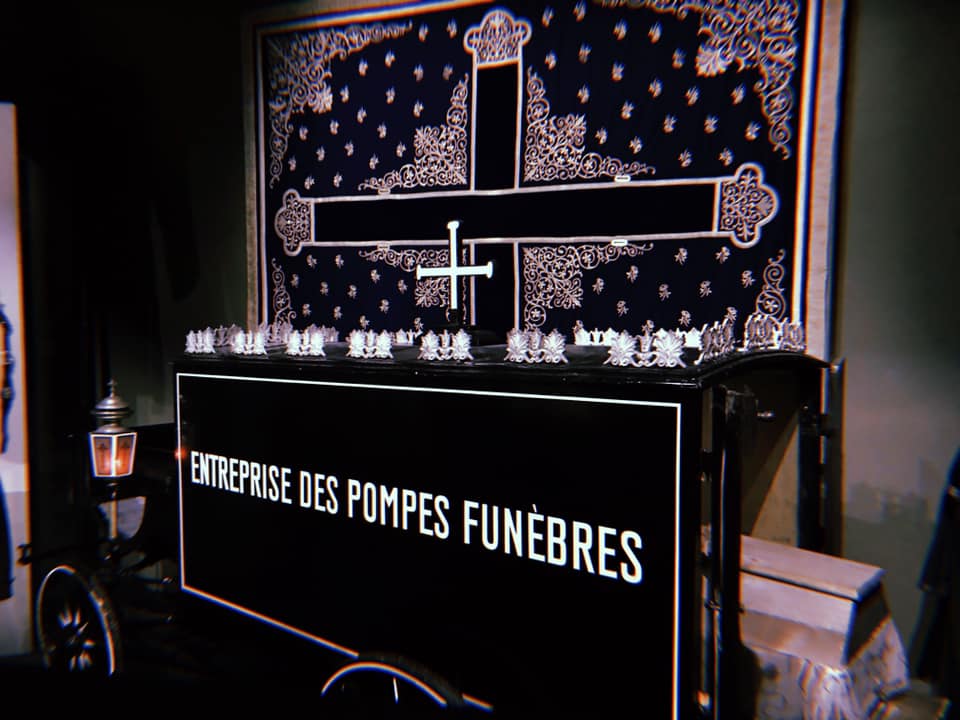 Few things not only live up to your expectations but exceed them. The Funeral Museum has found its home in the Vienna Central Cemetery and covers everything from mourning garb to the obsession with leaving a “beautiful corpse.”  The museum touches on funeral fashion – including a headdress of myrtle being for a woman who died unmarried – to what can only be described as zines, as memorials for the departed. One of the most prolific parts of museum though is the hinged coffin.  The coffin has a trap door bottom to let the corpse in to the grave, meaning the then expensive coffin could be used for other burials.  One of the more morbid pieces on display was a device that would be attached to the buried persons hand and then attached to a bell – just in case you weren’t actually dead when you were buried. Being buried alive? Big time fear and the Viennese were all about finding solutions – including some requesting that upon proclaimed dead that they were stabbed in the heart. Just to make sure. 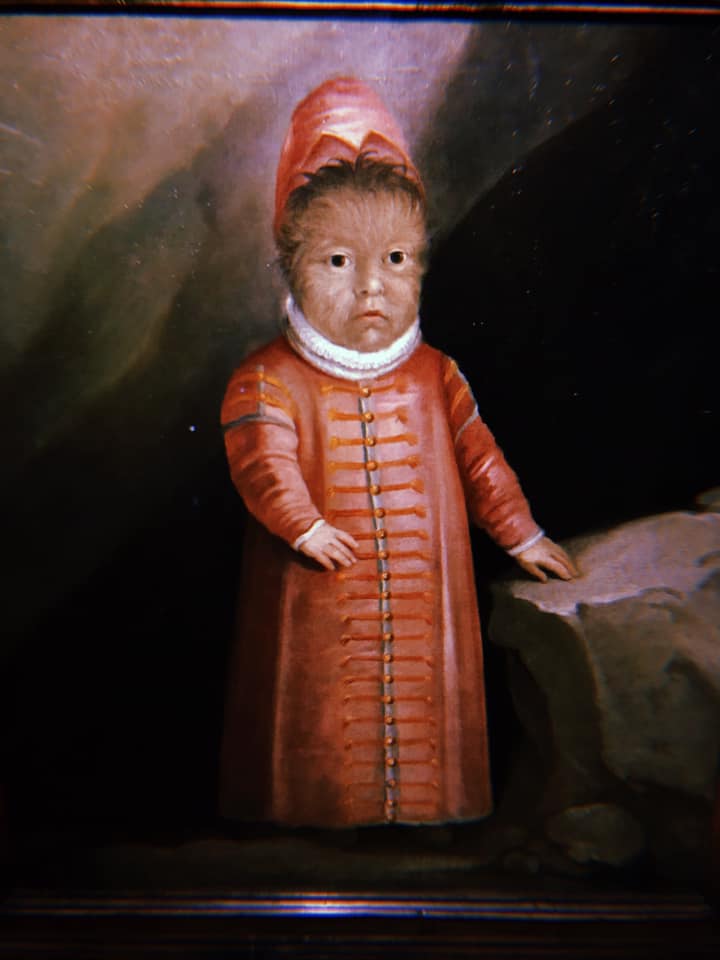 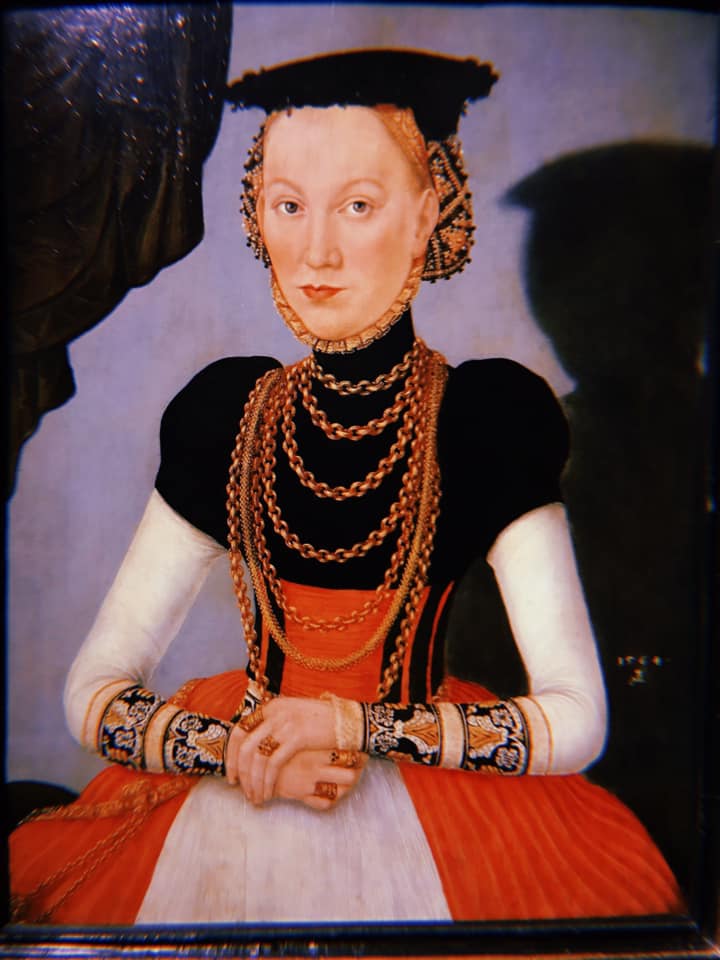 The Kunsthistorisches museum is currently home to an exhibition curated by director Wes Anderson and his partner and artist Juman Malouf. The two were invited to tour the museums archives and have selected some of their favourite oddities which are gathered together to present “Spitzmaus Mummy in a coffin and other treasures.”  Other than a mummified mouse in a coffin there’s quirky portraits including a “wolf-faced” family, miniature knifes and a collection of jade. 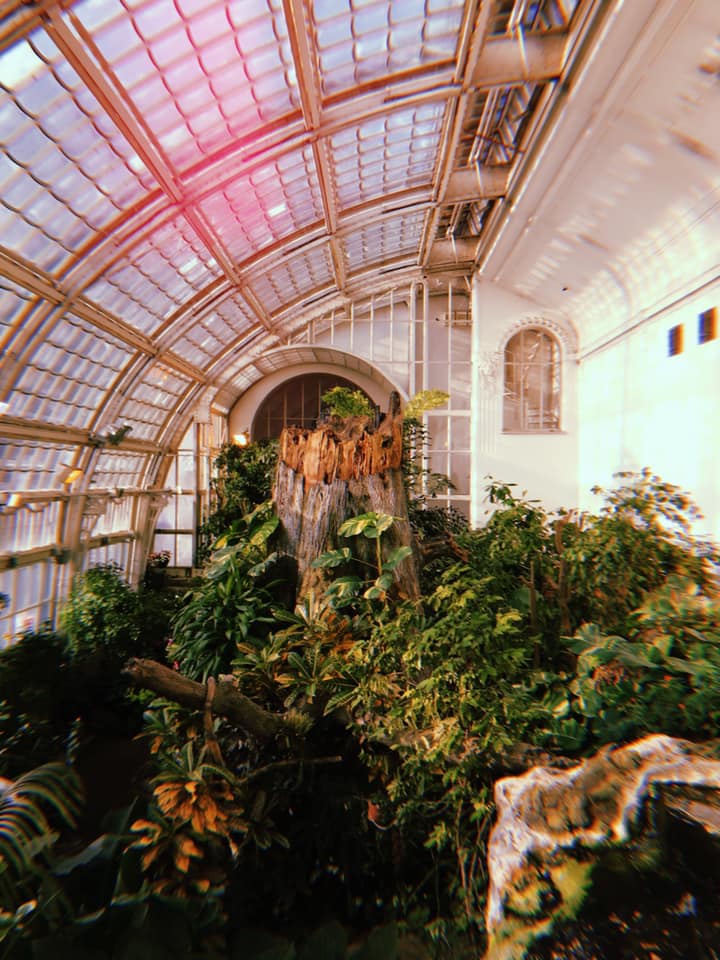 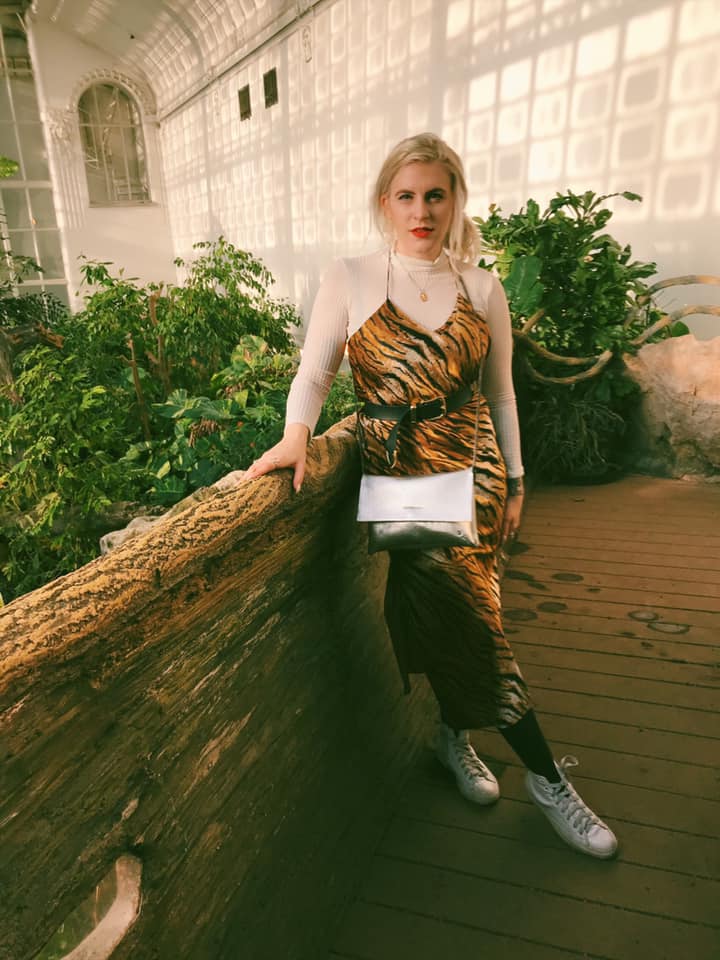 The Butterfly House is a tropical art nouveau palm house in the heart of Vienna.  Other than being splendid gardens a stone’s throw away from the opera it’s also home to hundreds of tropical plants and butterflies (clues in the name.)  It’s a controlled environment at about 26 degrees and pretty humid so it’s a lovely tranquil escape especially in the winter months and an unexpected favourite stop on the trip.

Places to Eat and Drink 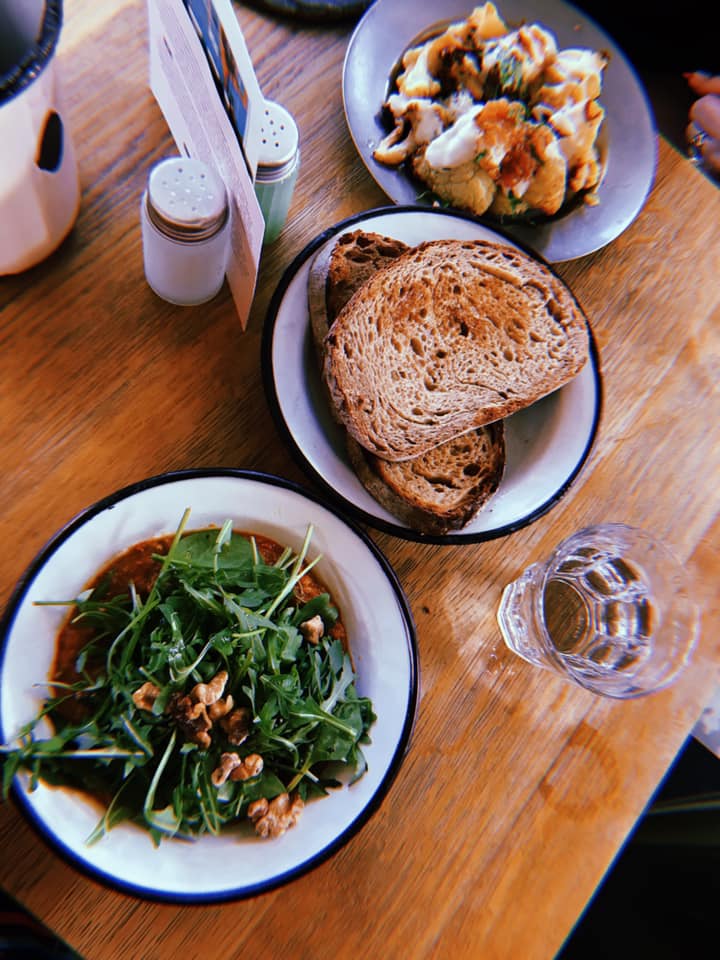 If you only eat one thing at Naschmarkt please make it anything at Neni.  There is a little roasted cauliflower guy that I still think about often as well as Sakuska eggplant tomato boy that was just smoky and sweet and delightful. The Arabian and Jewish restaurant is spread across two floors and an additional unit off to the side. The mixed plates of falafel and hummus piled high looked incredible and would be worth a return journey alone. 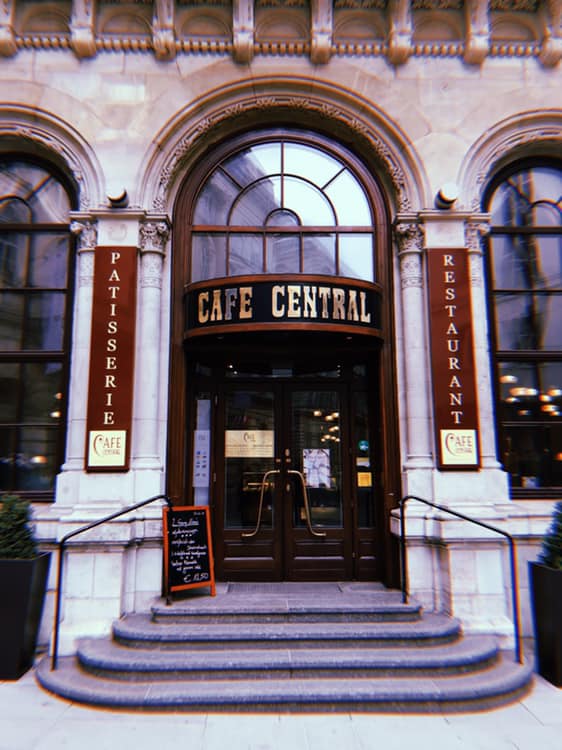 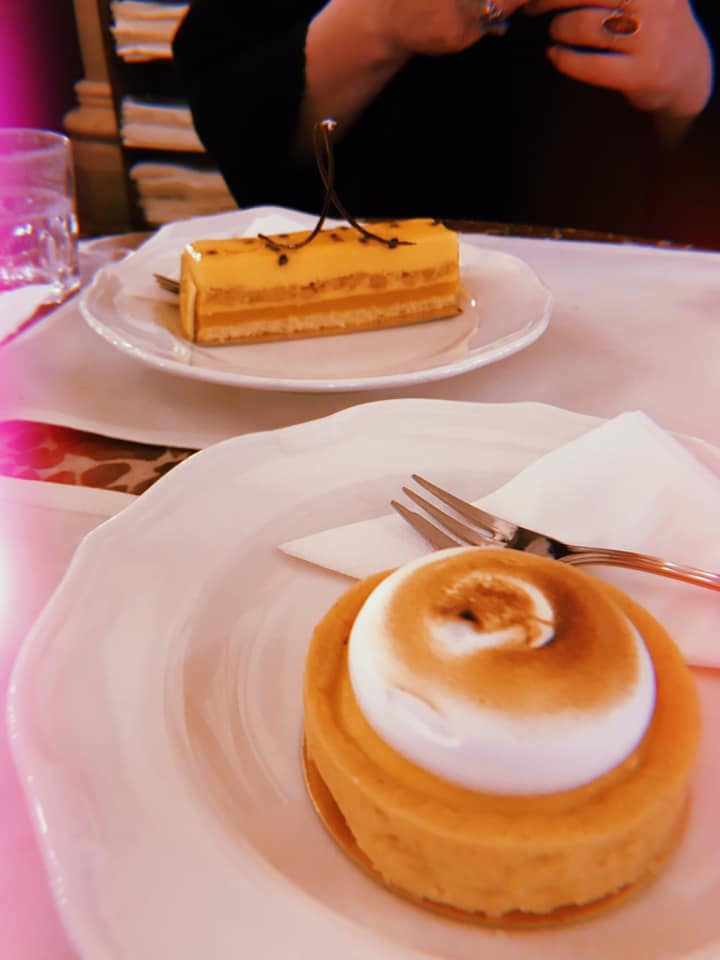 I know, I know – Vienna and cafe culture go hand and hand and Cafe Central is both one of the most basic and obvious choices here. And look the building is beautiful, the service, second to none but that’s not why this place made the list. Oh no.  You are going to Cafe Central for one thing and one thing alone. Their lemon meringue pie. I cannot begin to describe how transcendent this little morsel was. My friend and I also had ordered a passion fruit slice which while tasty on its own, paled in comparison to this piece of sheer poetry made form in pastry. It was the perfect balance of tart and sweet and the texture was just perfect. I could have made this entire post about this pie alone and it would be enough of a reason to visit Vienna. Truly life changing. 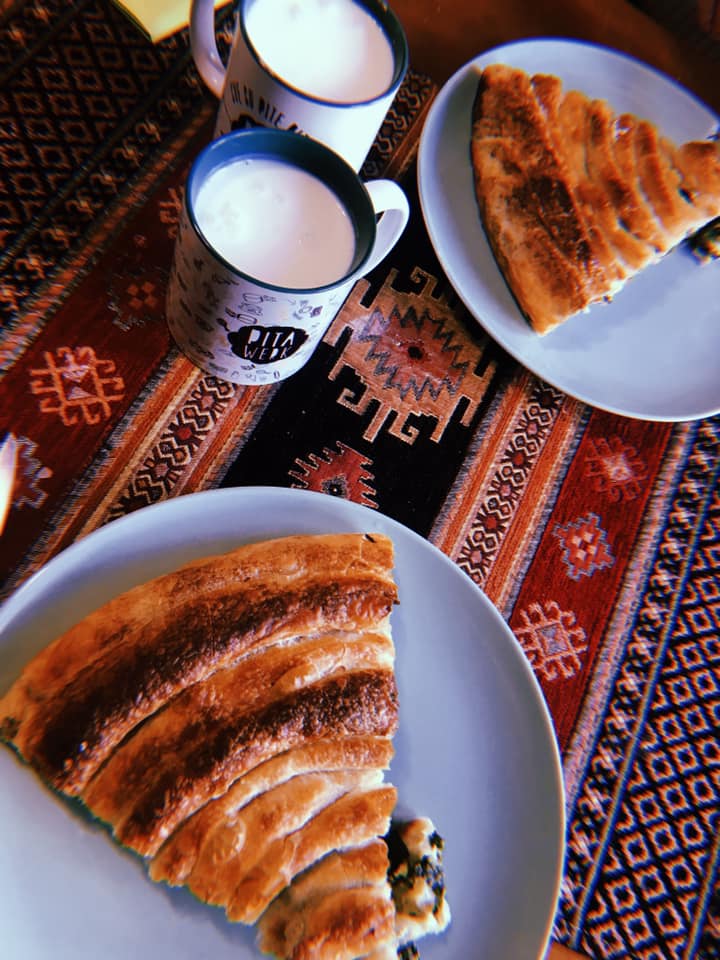 Pitawerk serves one thing and one thing only. Pita – a filo pastry packed with either meats or greens.  I suppose the best way to describe it was like eating the best part of a steak pie’s pastry lid over and over again. Served with a thin Greek yoghurt style drink this is a quick budget eat that’s hearty, delicious and all sorts of wonderful.

The only reason I ended up here was Anthony Bourdain. And I’m glad I did. The small bistro is affordable, delicious traditional Austrian dishes. It’s all wood panelling and smoke and has feels like stepping back in time. It was also the best meal I had there. I went for duck and dumplings and everything was just so simply made but done so to perfection.  After I spend time there drinking cheap red (even cheap wine on the continent is better than most I’ll get on a night out here) chain smoked and eyed up the sweet pub dogs.  Some places are all hype with little to follow it up, this isn’t the case here. 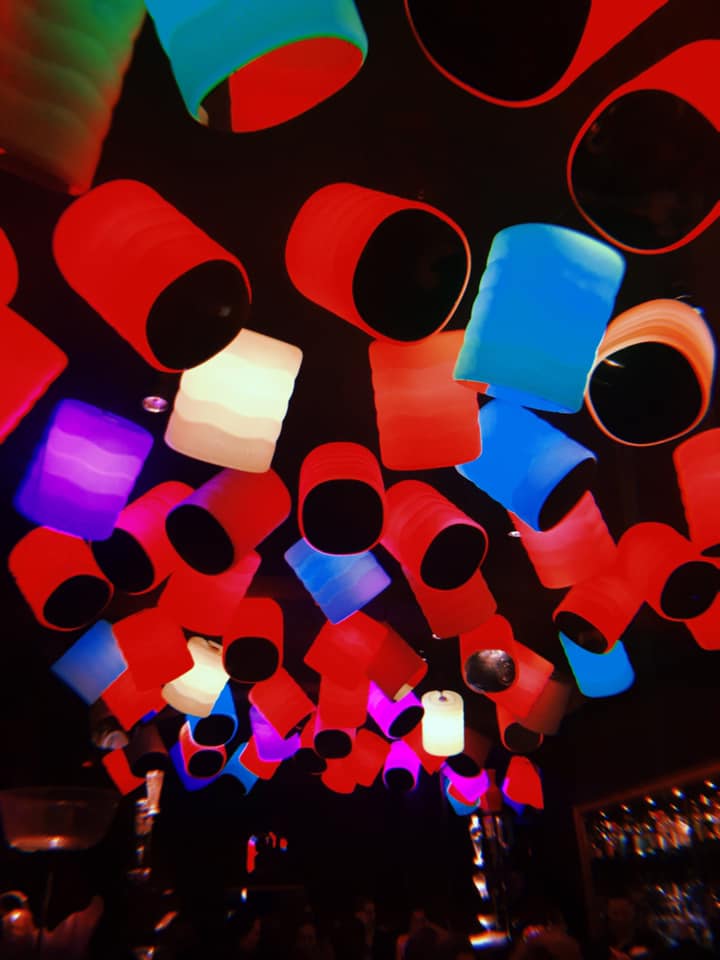 A cocktail bar and former brothel – Puff is high on the design concept and mixes a solid drink. The bar is obviously popular and has a lively atmosphere yet the bartenders still remain friendly and attentive. It’s a gorgeous looking bar though smells heavily of smoke – so if you’re looking for a quiet night give this a hard pass. If however you are looking to start your night off on a high and fancy experimenting with some beautifully crafted cocktails, Puff belongs on your list. 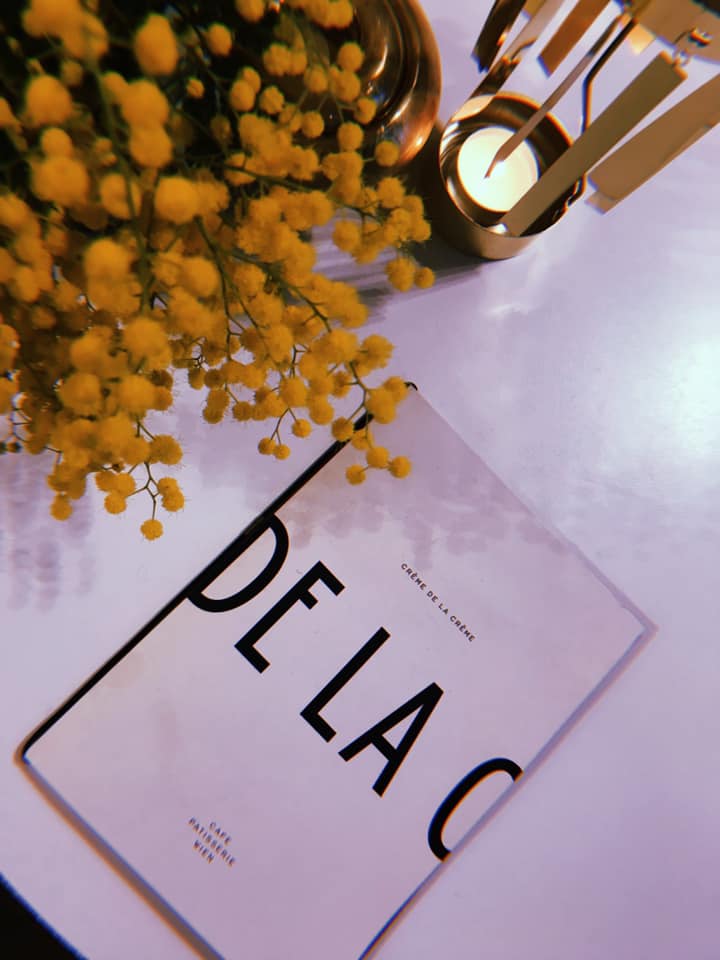 Yet another pastry shop. Creme de La Creme is yet another essential stop for any cake enthusiast in Vienna. Other than some of the most beautifully crafted chocolates I’ve had the pleasure of eating they make a solid lemon meringue. While I may not quite wax poetic about it the pie from Cafe Central, their takeaway cakes are moreish little confections.

I’d recommend an Airbnb for the trip.  Our flat was inexpensive, close to pretty much everywhere we wanted to go and having wine by a fire was a definite plus. Sacher cake: not worth the hype. The hotel is beautiful but ultimately you’re paying more for the experience than the kudos than the actual food. Smoking inside is very much still a thing here and while some places do have no smoking areas, it’s something to take note of when going out for dinner.

Vienna’s gorgeous and I felt super safe walking around here. Triple check your opening times, order a private hire car from the airport (worth the extra cost, believe me) and eat lots of cake. If you’re going to Vienna, you’ll love it. 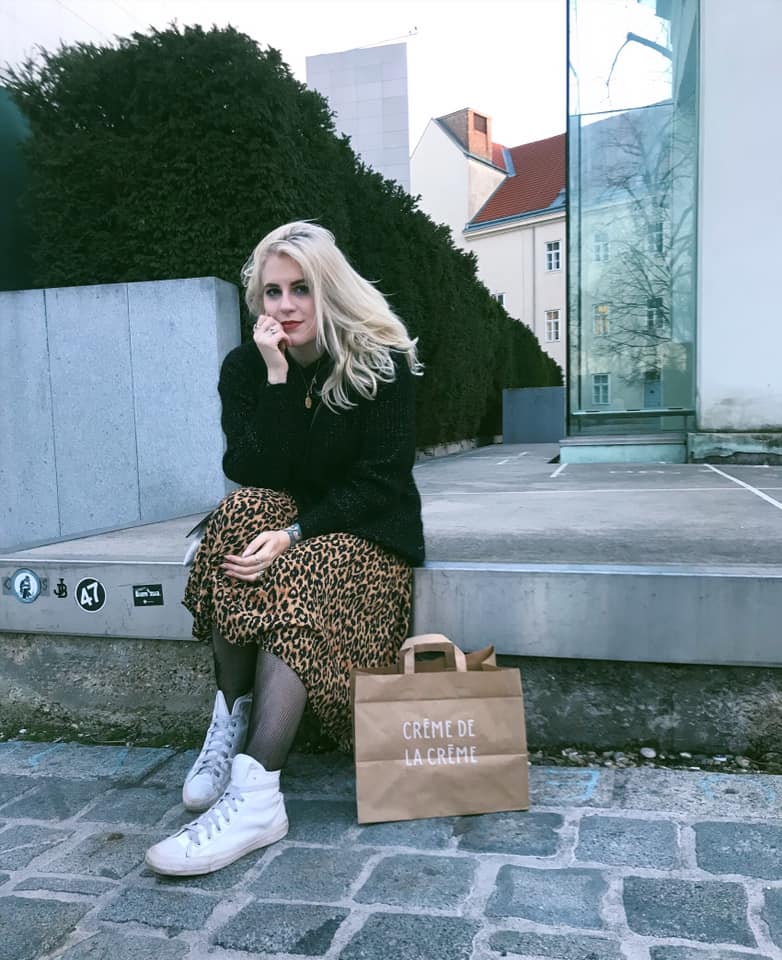