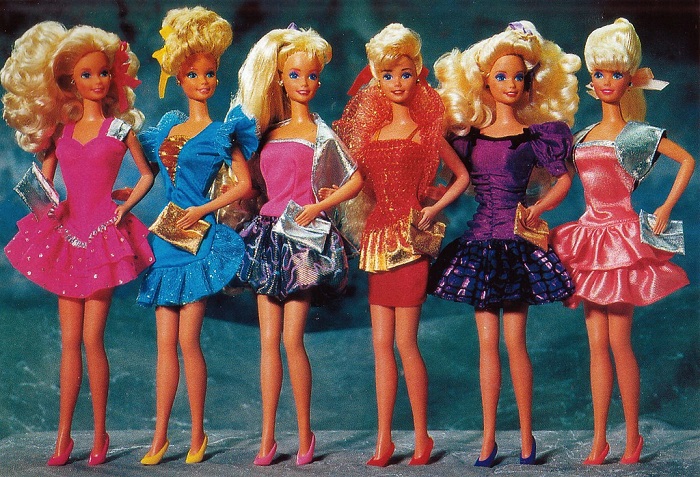 Barbie can be anything except perhaps a feminist. This year Mattel are celebrating 60 years of Barbie and yet we’re still asking if she is and still should be a role model. Barbie has always courted controversy – famously being originally based on Lilli, a German adult novelty and comic character.  The kind of character that when a policemen tells her two-piece swimsuits are illegal outside she clapped back “Oh and in your opinion, what part should I take off?” She was sassy, sharp and sexy and encapsulated the kind of moral panic that came with the first Barbie doll. Because why would a toy have tits? Won’t someone think of the children?

Before Barbie dolls for girls were baby dolls and were mostly a pseudo rehearsal for motherhood. It suggested play as only way to be a grown up and that was as a care-giver. Barbie was an adult women and was designed for children to see what they could be.  Barbie’s been a ballerina, a vet and a rock star. She ran’s for president, was an astronaut, baker, robots engineer and most recently a vlogger. Because Barbie could be anything. Even if for the most part that was thin, blonde and white.

If it wasn’t Barbie’s breasts that were causing outrage it was her waistline.  Barbie’s been called everything from pornographic and inappropriate to a completely unrealistic representation of an adult. While Barbie may have been revolutionary when she first made it to market but she’s had her fair share of missteps.  The 1965 slumber party Barbie complete with scales set permanently to 110 and a book on “How to Lose Weight” (“Don’t Eat”) is far from a good look while the Teen Talk Barbie of 1992 included phrases like “Math class is tough” and “Will we ever have enough clothes” and became the premise behind the Simpsons episode Lisa vs Malibu Stacy.

They introduced their first non-white doll in 1967 before their greatest shake up to date with “Project Dawn.” Project Dawn saw Barbie release seven skin tones, 24 hairstyles, 22 eye colours and three new body shapes including the now famous curvy Barbie as part of their main line.   Over half of the Barbie’s now sold aren’t from the original range (turns out offering consumers a more diverse offering works, who knew huh?) and the brand is committing to this part of their long term sales strategy.  This includes a Barbie in a wheelchair and Barbie with a prosthetic leg launching later this year all the while keeping the doll with a $10 price band.

Visibility and seeing representation in play is as important as it is seeing representation in media. The “Inspiring Women” line in concept seems great celebrating a range of artists, filmmakers and scientists.  Frida Kahlo’s doll however saw injunctions for sales of the doll in Mexico.  It was argued the doll was too fair and that Kahlo’s disabilities and facial hair weren’t fully represented. It was a commodified and sanitised version of the life-long communist and cultural icon, repackaged for a mass market.  Representation is great as long as it’s not completely tone deaf.

Arguing Barbie’s feminist credentials might not line up with her checkered past but ultimately Mattel are learning and trying – and the idea that Barbie can’t be feminist irks me. As if the idea there can only be one idea of what a feminist looks like. My Barbie’s weren’t dominating the board room and they weren’t happy home makers either. Instead they found themselves part of an ever rotating cast in a melodramatic soap opera.  They had ongoing storylines, a variety of outfits – both swapped, shared and made.  They would have hastily applied tattoos or coloured hair and outlandish storylines of love, death and blackmail.  I never saw myself in Barbie, she was just a way to try on different ideas and personalities.  For all the celebration and critique around Barbie, she still remains a blank canvas – just with a few more options of what is projected on to that.  She can have the pink house and want to have a wedding and hang out with her friends as much as she can be a sports star or scientist.  Barbie wants to be a symbol of unlimited potential but to get there Mattel will need to continue on their work that Project Dawn began.  Barbie might be able to be anything but she’s only a small part of teaching children they can aspire to more too.