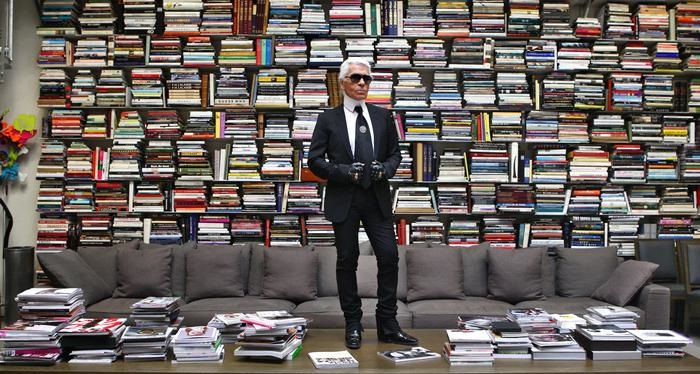 Upon the news of “Kaiser” Karl Lagerfeld’s death earlier this week social media seemed to be split between mourning a fashion icon to damning a man who has been called racist, sexist and fat-phobic.  All your faves are problematic and few have had as much cultural cache and influence as Lagerfeld.  His legacy saw him transform the likes of Fendi and Chanel with an irreverent approach to reinventing the classics with a couturiers eye,  all but birthing the likes of high/low fashion collaborations with his 2004 partnership with H&M, and his couture shows leaned far into the spectacle and theatricality and unabashed frivolity of fashion. He was undoubtedly a creative visionary and one of fashion’s leading lights in the 20th century.  , He transformed the fashion landscape and played more than a hand in creating some of the most exciting designs and shows of the last 50 years.  Lagerfeld has become more of a symbol, born from a sense of the force of personality who frequently courted controversy.  Eccentricity is a lazy shorthand for excusing cruelty and Lagerfeld defined what beauty looked like for a generation and that was thin, rich and white.

Lagerfeld was a man of contradictions and saw himself frequently under fire for his support of the fur trade.  His work with Fendi saw him playing with pelts in a way they never had been before – from colouring, shaving, shearing – fur was to be fun and indeed continued his use of fur during his 50+ tenure with the brand.  He simply did not see the difference in eating meat, leather and wearing fur and found the protestations against it at best childish.  Yet last December Chanel was the first luxury fashion house to ban the use of exotic animal skins and furs.

In interviews, he had an almost apathetic approach to the #metoo movement.  Fashion had been long dogged by the exploitation of vulnerable young people, however, their comfort seemed secondary when it came to getting the shot.  The idea of asking a model what they were comfortable with and engaging in a dialogue seemed completely alien to him. He critiqued starlets who had left large swathes of time between coming forward and their assaults and defended Karl Templar regarding accusations of him trying to pull at a models pants on a shoot –  “If you don’t want your pants pulled about, don’t become a model! Join a nunnery, there’ll always be a place for you in the convent. They’re recruiting even!”

When it came to matters of race, Lagerfeld did not shy away from employing black or yellowface on Claudia Schiffer for a 2010 editorial, while has shown a deep disdain for refugees, implying that an influx of Syrian refugees to Germany would fuel anti-Semitism.  Lines like “the greatest thing Germany ever invented was the Holocaust” are probably not the kind of thing you want to be dropping in casual conversation let alone televised interviews when you are one of the most prolific fashion voices in the world.

His commentary on women’s bodies though often grabbed him as many headlines as his spectacular runways. From calling Adele “too fat” to suggest those who have bought sweatpants have given up, Lagerfeld was not for a more inclusive and varied runway.  For him, fashion was a fantasy that was made to be occupied by the young and beautiful and that meant the young and thin.  He couldn’t believe anyone would want to see any bodies other than those on the runway and suggested: “These are fat mummies sitting with their bags of crisps in front of the television, saying that thin models are ugly.”  For Lagerfeld, no one wanted to see round women.

Among all the vitriolic quips of the “Worst of Kaiser Karl” there are throngs of those who knew him citing his warmth, his kindness and compassion – suggesting his public person may have been as much of a uniform as his stiff collars and gloves.  I have no doubt that to those he was close to found him charming and loving and loyal.   His most infamous retorts are called “cutting” or “acid-tongued” when really they help normalise an attitude of if you’re not in you are most definitely out.   It’s become too easy to excuse people’s bad behaviour due to their skill, but we can be better than that. Lagerfeld was a talented designer and had a gift for making bad taste glamourous, his designs were fun and managed to blend classic sophistication with just the right amount of vulgarity and when someone like Lagerfeld passes it’s always tempting to pop open the old “separating the art and artist” can of worms.  I think admiring his craft as a fundamental part of fashion’s journey and history is fine, important even – but his attitude and stereotype of the bitchy fashion icon are all things that need to be put to rest along with Lagerfeld.  All your favourites might be problematic but that doesn’t mean we have to be going forward.