Fashion has a way of being political.  Especially if you happen to be the brand. Mhairi Mackenzie of Bonnie Bling has never shied away from making a statement.  She’s made a name for herself with her cheeky and irreverent takes on Scottish slang but more recently has turned her laser-cutter to more topical fare. Using acrylics Bonnie Bling’s designs have featured everything from the Scottish referendum, Trump’s presidency and more recently the social media phenomena that is (was) #MeToo. 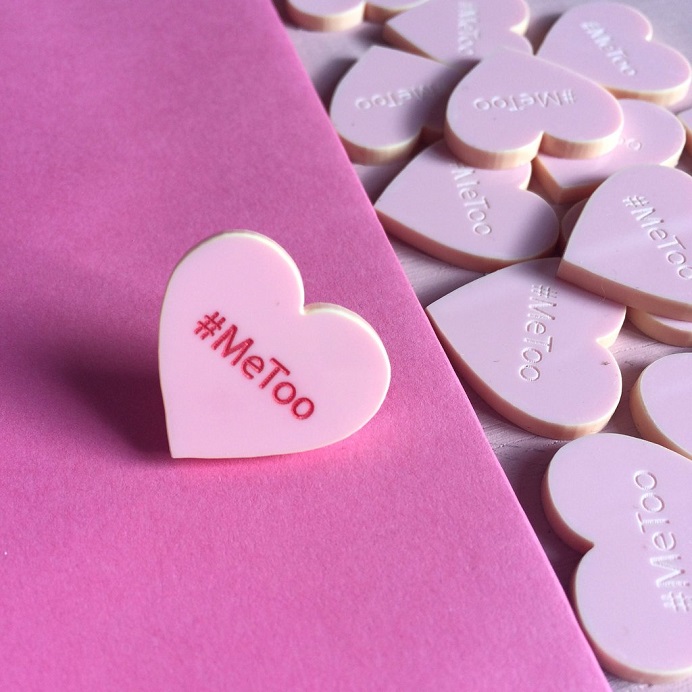 “Every badge I pack up is really emotional.” Mackenzie’s latest charitable efforts are plastic pink heart brooches stating firmly and clearly, #MeToo. “You’re very aware that this is going out to someone who’s featured some kind of sexual abuse and you can’t help but think about them and what they’ve been through. Though at the same time, it’s a constant reminder of your own trauma and it’s reliving it in every package. I’ve had some customers reach out and share their stories and it’s just a reminder how much it’s been normalised. I remember the first time I was abused and every time since – I don’t want that life for my daughter, or any woman.”  Mackenzie was so moved by the #MeToo social media campaign that saw women the world over share the simple hashtag as an act of solidarity but also to show how far spread sexual abuse was against women.  For something that had previously made her feel so helpless, Mackenzie felt it was important to do something, and giving women a voice and raising money for charity was just that. “It’s a way for women to feel less alone. I hope that people will see other women wear it in the street and know that there’s someone out there who understands. It’s painful and it’s sad but it’s also so important that this doesn’t disappear.”

Made to order in Mackenzie’s studio, the brooches profits will be going to a charity of her customers choosing. “It’s so hard to choose because there are so many incredible women’s charities out there. I’d love to support 2 or 3 of my customer’s favourites. It’s not much, but I can design and I’ve got my big old laser and I really wanted to do my bit.” 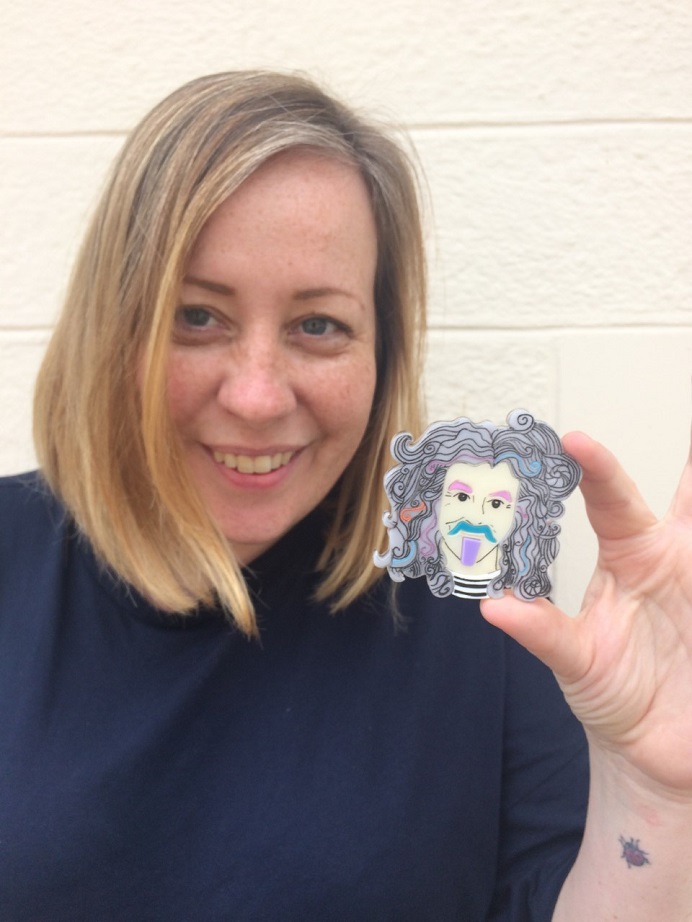 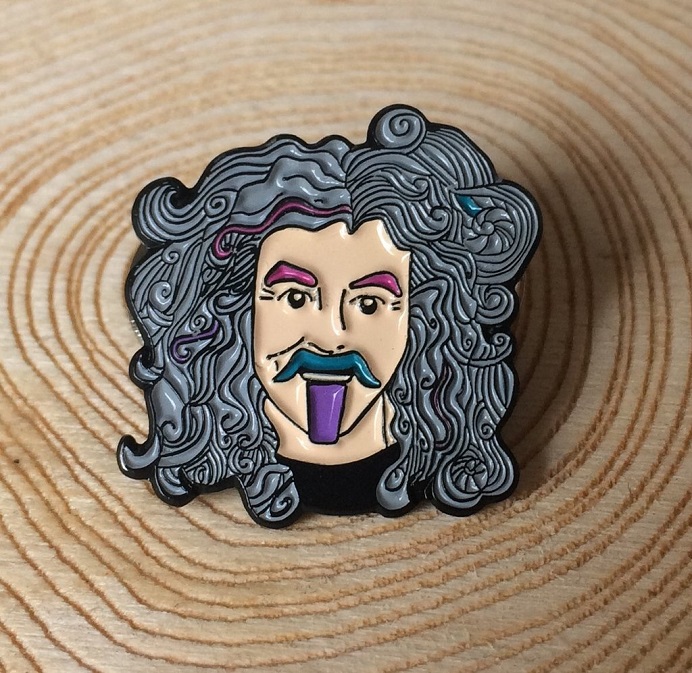 This isn’t Bonnie Bling’s first charitable efforts as to celebrate Billy Connolly’s 75th birthday, Mackenzie created a Big Yin brooch and pin with 10% of the sales going to Parkinson’s U.K.  While Mackenzie has always been inspired by pop-culture and Glasgow, the Billy Connolly broach was an extra special project.  “I loved seeing all the artist murals that were commissioned ahead of Billy’s birthday and it was just so lovely that Glasgow was able to say thank you. I wanted to do the same. I think everyone has memories of Billy – he’s so cross generational. He used to come to Rothesay all the time and you’d just see him sitting on a bench strumming his banjo and staring out to sea.” It was one particular memory though that inspired Bonnie Bling’s broach. “I was waiting for my friend at Glasgow Central as the photo booth and he just came over and was like – wait a wee minty and you’ll get a giggle – before popping in to the photo booth. So there I am, waiting on my pal, utterly star struck while Billy Connolly goes in to the photo booth to get his passport pictures done. And around this time this crowd starts to gather and are giving it the – is that – chat.  Right enough a few minutes later he comes out the photo booth and shows me his passport photo grinning “Acht I’m all hair.” And that just really stuck with me. All hair. I wanted to incorporate that in to the design.” 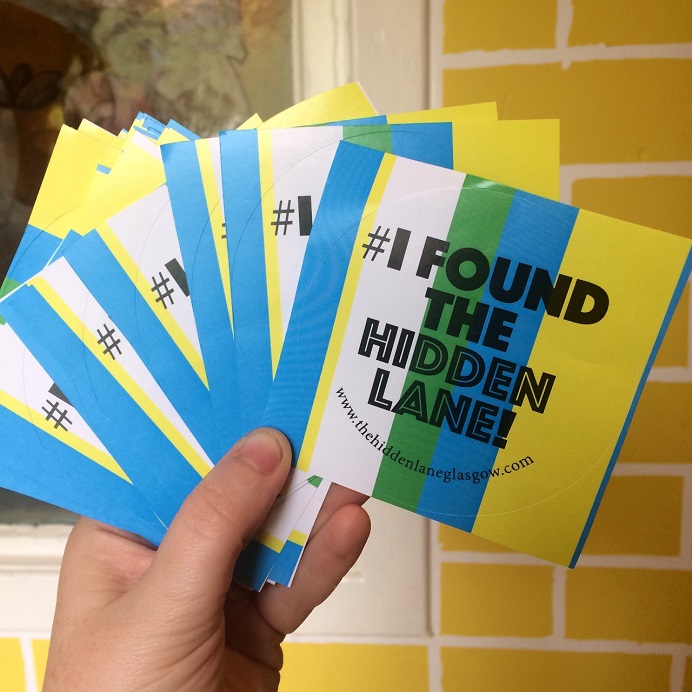 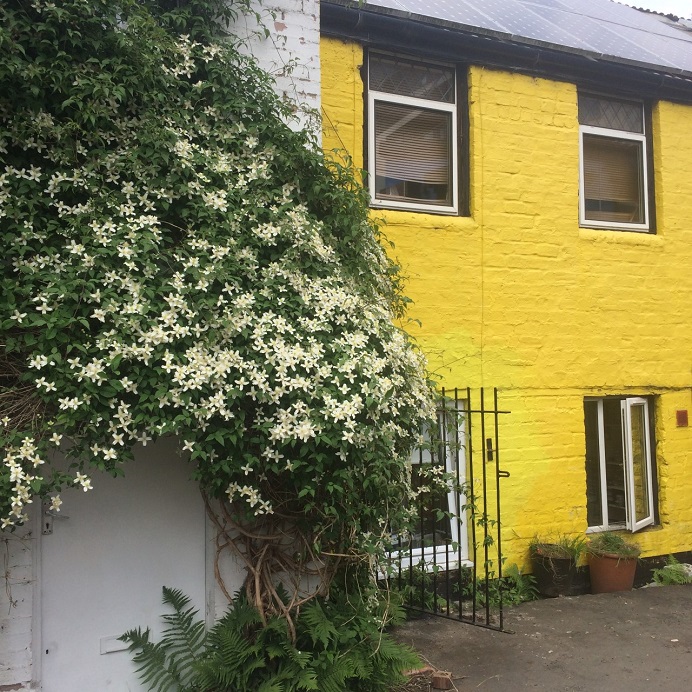 There’s no sign of slowing for Mackenzie, who recently picked up a commendation for accessory designer of the year at the Herald Fashion Awards. Based in her studio in The Hidden Lane the festive season sees her team up with the other small businesses around her for a jam packed series of events.  The 25th of November sees the Hidden Lane open their doors for their Hidden Christmas event with a focus on shopping local down Scotland’s best kept shopping secret.  Black Friday just so happens to be on the horizon too and Mackenzie guarantees shoppers will be spoiled for choice with her selection for this year.  Until then you can pick up any of Bonnie Bling’s designs via her website with the brucey bonus of shipping being completely free till Christmas. Never has there been a better time to wear your politics across your chest or indulge in some good old fashioned slang.