Apparently nearly half (48%) of Scottish men dislike body hair on a woman, with over a third (33%) having been tempted to or encouraged women to remove their body hair. Let that just sink in for a moment.  Let that wash over you for a hot second in hot little waves of rage. Allow this to be followed by an eye roll because this was a press release I received earlier this week for a hair removal clinic. In 2017.  Well, where do I even begin to unpack this hot mess? The key points I got from it though – most men don’t actually give two shits about your pubic regime, and the assumption that women should care is a big old bunch of bullshit. I mean, look, if you’re in to sleeping with women and you’re going to have a hissy fit because her pussy doesn’t meet your exacting standards, then frankly we’ve got bigger fish to fry and quite frankly, you have no business having sex to begin with. 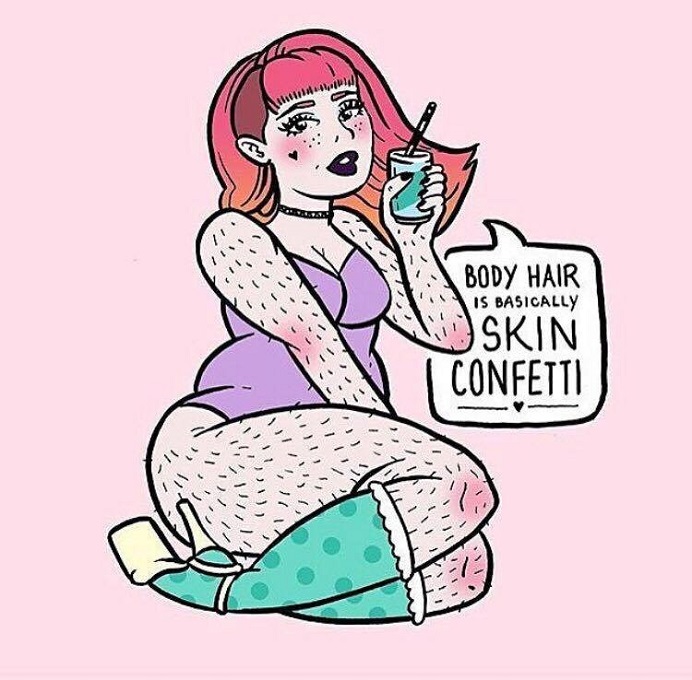 There’s no problem with a preference. Fuck, there is no problem
expressing a preference. The problem is where you think that I give a
single flying fuck. There’s a problem assuming all men want to fuck women, that all women want to fuck men AND that those who do want to fuck women are god damn follicle connoisseurs.  Sure, we have a culture of waxing and shaving, lotions, potions and lasers. And that’s fine. You do you baby. As I said, it’s all about preference. But perpetuating the idea that female beauty exists only in a commercialised standard is god damn dangerous. And probably more offensively, boring.

Thankfully online communities like tumblr and instagram are a cornucopia of tremendously brilliant babes celebrating beauty in all its forms and includes body hair (or lack thereof.) For some that’s having bright purple underarms hair or conversations where they are encouraged to stay wild, feel good and have some god damn fun.  For the most part though, it’s challenging exactly what’s so offencive about body hair to begin with.

If you wanna be baby fucking smooth, great. That can and does feel awesome. But if you want to rock up with some under arm hair and some winter leggings – that can be done without a side helping of shame.  I mean, let’s face it – what someone decides to do or not do with their hair has got to be up there with the least interesting thing about them. So why are we being sent bullshit research results designed to play to a plethora of insecurities?  To sell? Come now, I think today’s consumers are a little bit savvier than some arbitrary numbers on paper. Find what feels good baby, whether that’s under the laser or throwing out the razors, cause remember you are god damn beautiful.