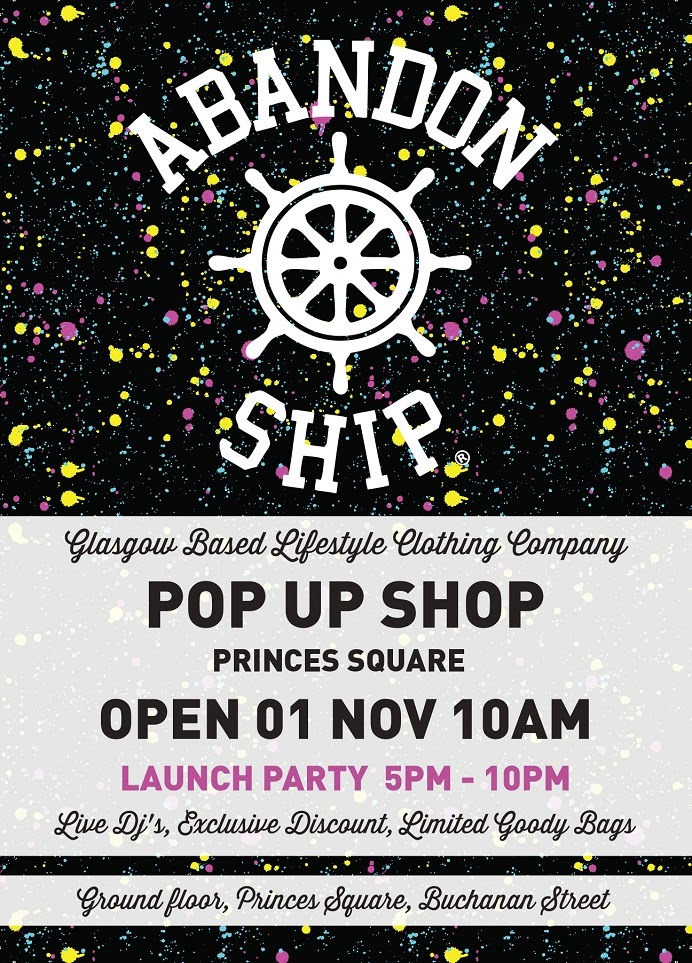 Nominated as Glasgow’s favourite business and well on their way to world take over, it’s about time Abandon Ship Apparel had a Glasgow based pop up shop. Fresh off their success of their London Boxpark pop up and a year of globe trotting (and prospects of utterly smashing America on the horizon) – it’s great to see this Scottish born brand come home with their first pop up on their own turf.

Abandon Ship have been utterly killing it since friends Richard Davies & Duncan Sweeny set up shop in 2011. It was all about making really well made clothes that they loves and wanted to wear. They’ve had some cool as collabs under their belt and have become one of the most beloved up coming cult street and lifestyle brands in a few short years.

The pop up launches this Friday – taking over an industrial styled space in Princes Square (I KNOW, BOYS BE FANCY RIGHT??) for a 3 month take over. Kicking things off from 5pm it’s going to be a case of tunes, booze and excellent chat – with some in store exclusives and some other heavy exciting bits and bobs in the pipeline.

It’s been a long time coming and am heavy excited to see some local boys done good with their own high street premises in the city centre. I know I’ll be there on the night deeking out the limited edition bat top like nothing else and can’t wait to see what else they have in store. If there is one thing the boys at ASA know how to do it’s throw a party.

So 5pm, Friday, see you there?