Last weekend, Premier Inn at Haymarket invited me to experience my fantasy fringe. With 48 hours to kill, a city centre hotel and my most sensible shoes (okay – the last part was a lie) I wanted to do a special Edinburgh Fringe edition of my Glasgow Girl’s Guide on the places you cannot miss on a city break to Edinburgh during festival season, or hell any time you fancy a wee city break to one of Europe’s prettiest cities (sorry Glasgow.) 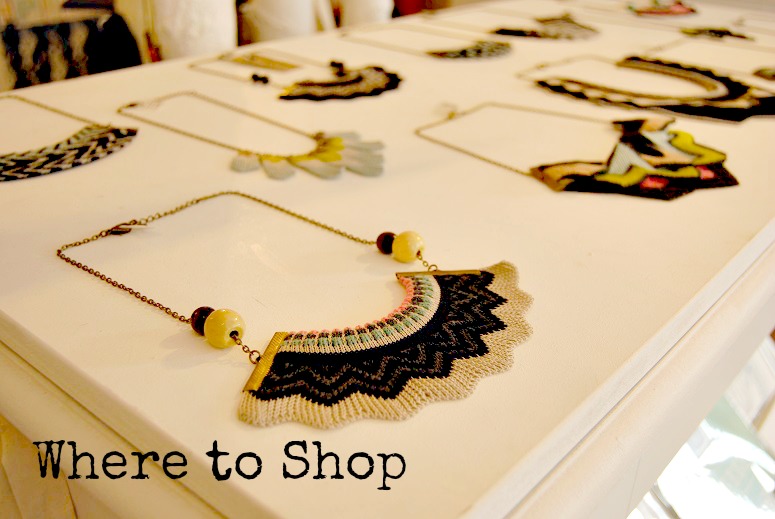 One of my fave shops ever, let alone in Edinburgh, Godiva is a great wee boutique just off the Grassmarket filled with a perfect mix of independent designers and vintage. This place stocks some of my all time fave things including illustrated scarves from Red Brick, beautiful bespoke dresses from Scottish designer Rowan Joy (who frequently crafts away in the basement) and some stellar recycled leather bars from Paperthinks in pretty much every colour imaginable.
9 West Port, Edinburgh

If you’re looking for some unusually jewellery this is the place you have to hit up.  I particularly enjoyed the chunky geometric knitted statement necklaces from Amy Lawerence but the real highlight for me? The jeweller they stock that got under my skin? Kate Gilliland folks. It’s been a while since a jeweller has properly got under my skin in a big way (last one is probably Jane Gowans who you can also buy here.) Tiny bones and tiny claws – its luxe wearable taxidermy. I love the little spines cast in silver and the fact it’s all from creatures she’s found so the conscience  is clear too.
The Grassmarket Hotel, Grassmarket, Edinburgh

This used to be one of my favourite shops ever back in my Burgh days (we’re talking about near enough a decade ago.) Revisiting it was a proper delight and it’s pretty much the best place to sort yourself with affordable prints and art pieces from emerging artists. I love loved loved the quirky mouse portraits, the his n hers tattoo couple prints and the Owl & The Pussycat cushion
42 Victoria Street, Edinburgh

Great shop just off the Grassmarket. Great for affordable prints, jewellery and the cutest collection of tote bags you ever did see. With exclusive collaborations from the likes of Gemma Correll and stocking some of my fave jewelers (pop culture queen Kate Rowland does THE BEST broaches – Breaking Bad, Twin Peaks, Arrested Development – it’s like a check list of things I love) and is one wee shop you definitely want to check out.
43 Candlemaker Row, Edinburgh

Perfectly curated vintage. Really there isn’t much more I can say about it. I’ve passed this shop for months now when I’ve been working in Edinburgh but because of my shifts it’s always been closed. I finally managed to pop in and it was SO WORTH IT. The first thing I saw as I came through the door was a brightly coloured Mary Quant rainncoat (available with all it’s original packaging) quickly followed by some totally amazing statement pieces – including a pearl and amber beaded choker and a beaded panda evening purse.  Ideal for the vintage fan who is looking for a few more unusual pieces for their collection.
151 West Port Street Edinburgh

If you’re looking for a designer fix look no further than Jane Davidson’s Boutique. Dries Van Noten, Preen, Queen & Belle, Erdem, Issa – it’s perfect for having a good old deek, especially since it’s got a few instore exclusives that you won’t find anywhere else in Scotland.
52 Thistle Street, Edinburgh

A bit of a tricky one to find but well worth it once you do. Dark, atmospheric and with a killer hip hop soundtrack Bramble is the place you want to deek if you love your cocktails. This place has a huge selection of gins,rums,whiskys – so definitely going to be something you like here. The bartenders really know their stuff and I had the best whisky cocktail I’ve ever had here. Great if you’re looking for something laid back and intimate.
16A Queen Street, Edinburgh

The sister bar of Bramble and only a quick jaunt along the road. 13 cocktails, 13 spirits, changing with the season. A brighter, fresher look to Bramble but still with the great same service and delicious cocktails.  If you find yourself daunted by large cocktail menus this stripped back bar is pour vous. Also unlike Bramble you can also hit yourself up with beer on tap. But why would you want to do that?
39A Queen Street, Edinburgh

The pop up Pommery champagne bar returns to Edinburgh for the Fringe. The Signet Library is a crazy beautiful location and I can think of few grander locations for the pop up bar. Great menu, loads of bubbly and a chance to enjoy a tour of this most unusual venue.
Parliament Square, Edinburgh

This guy was little over a 5 minute walk from the Premier Inn and was always packed. A local favourite with a wide selection of rums, whiskys, vodkas and beers. A nice alternative to kicking about the city centre but still after a warm friendly atmosphere. Also – KILLER view of the castle when you nip outside.
2 Spittal Street, Edinburgh 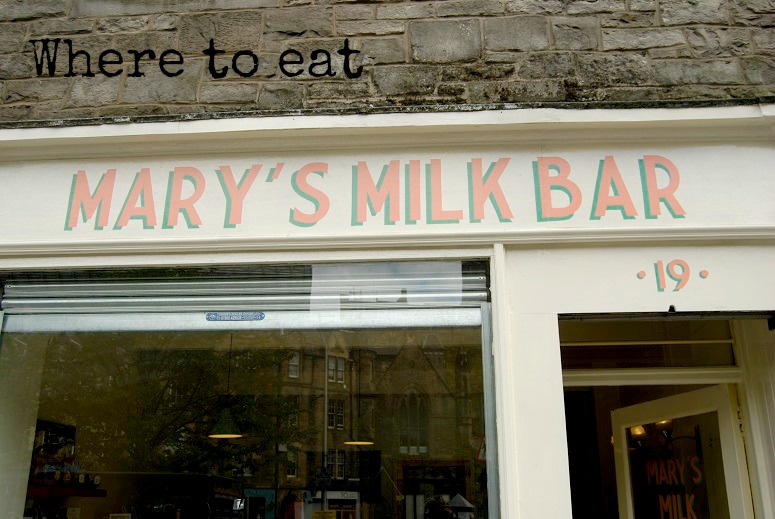 There are loads of great places to eat in the Old Town and Maison Bleue is well worth a visit if looking for something a bit lovely. It has a wonderfully intimate old town vibe with atmospheric lighting, wood paneling and a proper old school spiral staircase. The staff were knowledgeable and attentive and the food was super tasty. I had the pigeon and the fish, Paul has haggis balls and steak. Both were super good and part of their celebratory 15 year anniversary pre-theatre deal (£15 for 2 courses, £5 supplement on the steak.) Would happily go again.
36-38 Victoria Street, Edinburgh

The newest addition to the Grassmarket, Mary’s Milk Bar has been open for just over 3 weeks and is already becoming a firm favourite with locals. Armed with her flavour thesaurus, Mary blends up an imaginative mix of classics and unusual flavour combos of gelato and sorbet. Melon and chilli, star anise and chocolate and lavender were some of the flavours available when I popped in (with offerings changing daily) as well as a good old vanilla and the best looking raspberry ripple I’ve ever seen. Generous portions, super price and really cute kitschy retro interior. If you can only go one place for eats, go here.
19 Grassmarket, Edinburgh

Frozen yogurt is one of my favourite things ever and I’ve heard loads about it. I happened to pass a wee Frisky stand on Rose Street and tried some with raspberry topping (just something really simple.) Super refreshing and light AND guilt free. I can’t wait to pop through and get some more (there is one located handily on Lothian Road) and trying out a few more of the toppings! Watermelon, rose petals and pistachios (not all together!) – COME FOR ME.
37 Lothian Road, Edinburgh

Creative arts hub a little bit out of the city centre but well worth the visit. The restaurant -The Royal Dick – is fantastic. Filled with odd nooks and crannies and mismatched furniture, the food here is exceptional. Competitively priced and with most mains clocking in under a £10er popping in here won’t break the bank but will also set you up with some frigging delicious food.
Summerhall Place,Edinburgh

There’s much debate about where the best place for a brownie is in Edinburgh. For me I fly the Peppers flag pretty high. Gooey, chewy oreo cheesecake brownies freshly baked in store on the day and some super tasty freshly made sandwiches. Great place to get something to grab and go.
32 Lady Lawson Street, Edinburgh 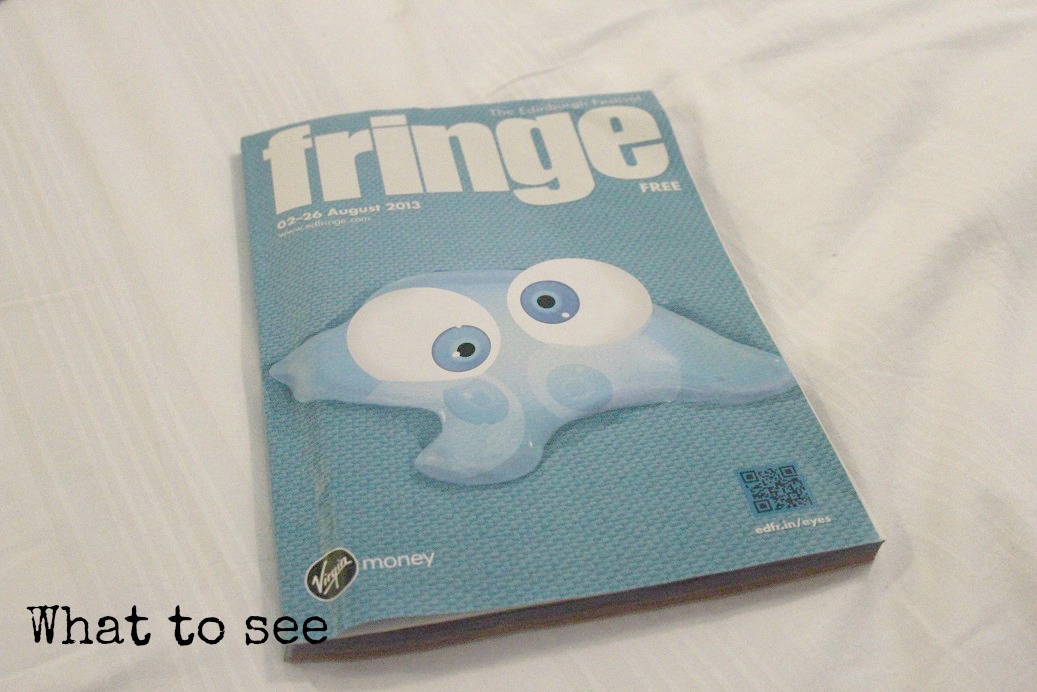 The Boy With Tape on His Face – More Tape:  If you only see one show at The Fringe make it this one. I took my boy to see this guy who is the harshest of critics, going in ready to hate. Less than 5 minutes in and he’s doubled over with laughter. There aren’t words to describe how wonderful this show is.

Dandy Darkly’s Gory Hole: Self described as “the bastard lovechild of Liberace and Elvira” there is no way I won’t enjoy this with a set up like that. Supernatural sleeze and homosexual horror with tales of sex and death from beyond the gory hole sounds like a perfect way to spend an evening at the Fringe.

The Dark Art of Cocktails: A cocktail masterclass with cocktail recipes by Aleister Crowley? What is not to love. One of several occult based gin events in the Hendricks Carnival of Knowledge.

Why Let Death Ruin A Good Conversation: Brought to Edinburgh by events masters The Last Tuesday Society as part of the Hendrick’s Carnival of Knowledge this seance themed evening is expected to big on spectacle and bigger on gin. One that I certainly have pinned in the calender.


Fanfiction Comedy:  Charming, funny and just a little bit weird, Fanfiction Comedy is a great way to spend an afternoon. A humorous look at the slightly off beat geeky world of fanfiction.

A big thank you to the team at Premier Inn Haymarket. My stay there was fantastic. It was super central and I was able to explore a side of Edinburgh that wasn’t Princess Street (which is still lovely) super easily. It was nice, quiet and easy to get around and literally 5 minutes next to the train station.

Premier Inn are offering you a chance to experience your Fringe festival. £500 to spend on whatever you want and a city centre hotel in Fringe season sounds like a pretty sweet pot prize to me. They want to know where would you eat, what would you see and what else you would do in Scotland’s capital. 300 words with a deadline of tomorrow. In to it? You can find out more about how to enter here.