Thank god for Alan Moore. That’s all I can say. In Glasgow we really are spoiled for designers, but Moore’s own label ten30‘s self produced events are always a delight – retaining a sense of whimsy and curiosity. From air acrobatics in Oran Mor to a eastern European ballet in the Flying Duck – to a Scottish gangster inspired showcase in the Mal, what was next for Glasgow’s maverick designer?

Paint. Lots and lots of paint. 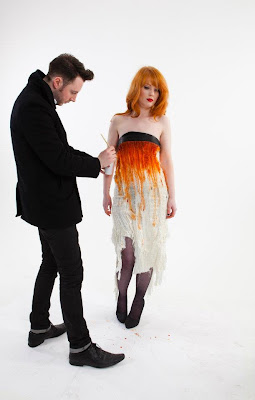 I will always have a soft spot for fashion film, and in the pass 3 years designers have upped the ante in creative beautifully constructed mini narratives. Moore however tackles a new approach. Destroying one of the signature pieces from his previous collection and creating something even more beautiful. Sexy, evocative and dark, Moore’s foray in to fashion film is a voyeuristic sensual piece following a transformation of one of Moore’s pieces – “The White Dress”

However exploring film is only the start of Moore’s exploration of his brand this year. There seems to be a strong theme of transformation and evolution with his collection – building on his previous collections to turn them in to something different as well as collaborations with other designers. His latest collaboration is with vintage label Beaten Crimson where he has adapted some of her pieces through paint and embroidery. 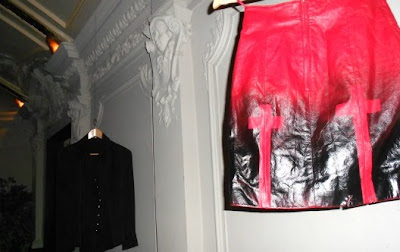 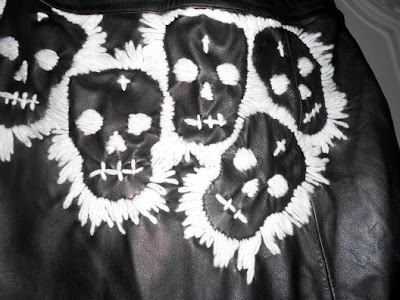 I sat down with Moore briefly after the show (read on a staircase in the middle of Sloans, who says fashion isn’t glamorous) to chat more about why he wanted to go in to film.
“Film’s something I’ve always wanted to go in to, I love the idea of capturing the moment, I mean you can’t reproduce a moment – it has this sense of abstract beauty. ” Although Moore confesses he is not much of “film buff” his search through art through motion and sound shows a real passion for the medium. “I always wanted to work in film, I could have more creative control of what story I wanted to tell. You loose so much in a photo. In film you can see the way the garment moves and capture a mood. I mean there is so much thought gone in to creating each garment, it’s nice to put that same amount of process in to creating the film.” Moore had a fantastic team behind him, working in SWG3 to shoot the short production and collaborating with Douglas King of 14c studios.
I have to say it’s wonderful to see designers working in new mediums and I adore the leather skirt with custom skulls. Moore’s designs continue to retain a dark, moody feel throughout – which should surprise no one, I’m totally on board with.
You can follow ten30 on facebook here to keep up to date with ten30 happenings.