During this festive season in between scoffing mass quantities of quality street and drinking far too much baileys it’s pretty much customary to go to the theatre. Last year it was me and the Tron gate crew heading down to the panto at the Citz, this year however thought would go for some slightly more sophisticated fare and take in a wee bit of the ballet, this year a lush as performance of the classic fairy tale Sleeping Beauty.
As always Scottish Ballet deliver a feast for the eyes in the luxurious performance. I love seeing simple stories brought to the stage with music, costume and dance with beauty and humor. Carabosse (the evil fairy) and her daughters were firm favourites for me – not only for their dark intricate costume designs, but their performance at Aurora’s christening was one of my favourites. It was fun watching Carabosses’ daughters kick cakes off the table and hassle the guests with their pure form of anarchy, accompanied with fast paced strings. Lots of tension and humor. The guests were brilliant and during the christening there was always something going on in the background which I really enjoyed. The regency style dresses in whites gave a lovely fresh and clean feeling that were a beautiful contrast to Carabosse’s black and green.
Aurora’s 16th Birthday party was brilliant – the young princesses in attendance were dressed in beautiful pastel dresses that reminded me of Luella of yore. The party was very opulent and glamorous, and the colours for the guests were very rich. Aurora’s dance with her suitors was brilliant, very charming seeing the princes pass Aurora, and everything felt strong and purposeful. It was really quite lovely. 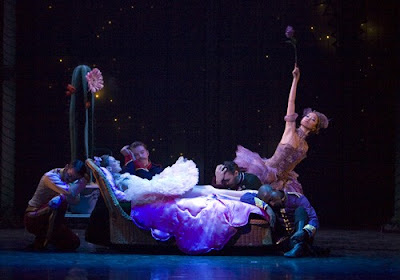 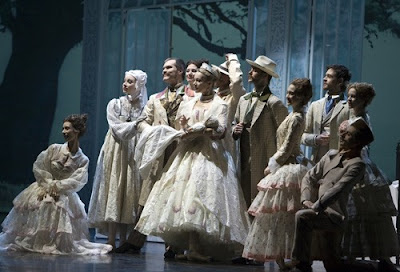 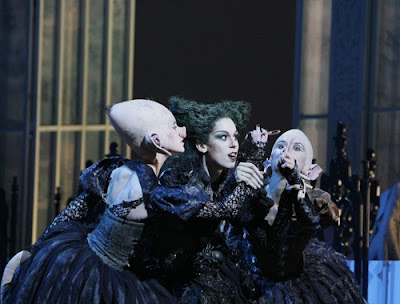 I loved seeing how the costumes changed in the final act to early 1940’s pieces. The colour use was more sparse but the pieces were beautiful, and the other fairy tale princesses that made an appearance had modernised fairy tale looks. I have to say I adored Red Riding Hood – her 1940’s dress looks like it could have been a Torres in another life and of all the princesses (other than Aurora) was my favourite.
Overall the production was simply magical, the music was amazing, the costumes were spectacular and the dancing as always was beautiful.
This year took the mum, grandmum and grandpop, the grandmum and mum were already great fan’s of the ballet, though this was their first time seeing a production from the Scottish Ballet, and grandpops? Well, he wasn’t quite sure what to expect. Needless to say by the end of it (like the boy a few months prior) he was a total convert. As we walked to the restaurant after he spoke fondly of the music and how ridiculously strong the dancers were. Seems to be a running theme with gentlemen who I introduce to the ballet.

Sleeping Beauty will be performed in Glasgow till the 31st of January at Theatre Royal before touring the rest of Scotland and Newcastle.
Festival Theatre, Edinburgh: 11-14th January
Her Majesty’s Theatre, Aberdeen: 18-21st January
Eden Court, Inverness: 25-28th January
Theatre Royal, Newcastle: 1-4th February
Tickets are priced between £10 – £37.50. If you’re looking to take in a show and you’re near any of these cities I would encourage anyone to go see Sleeping Beauty. If you’re under 26 their are usually last minute deals on the day so always worth a shot to keep an eye out for one of those. You can book yourselves some tickets here.

Hope you lovelies all had a Merry Christmas.