Saturday night I bagged myself a cheeky wee night off. Now what’s a gal to do in her city on a Saturday night? Head to the club and get “tipsy”, stay in with some Buffy and a bottle of vino and nachos – all excellent options to be sure – OR I could head to Glasgow’s very first pop up grindhouse cinema experience Grindhoose.

Set upstairs in the Old Hairdresser’s opposite Stereo, Grindhoose was all about bringing the NY gritty feel of 70s grindhouse cinema to Glasgow. With some sweet trailers (Combat Cop anyone?), two secret films and zombabe usherettes it seemed like a fairly good shout for a Saturday night. Oh aye…and it was free. 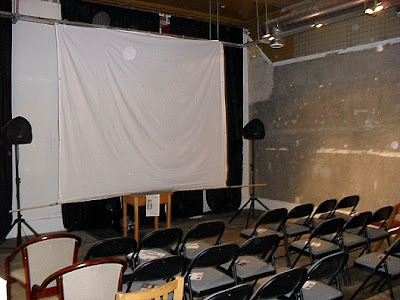 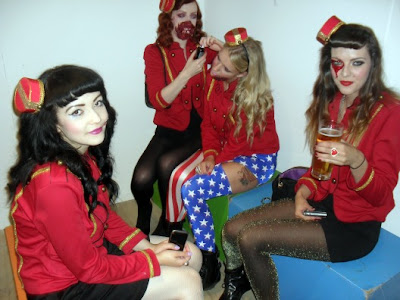 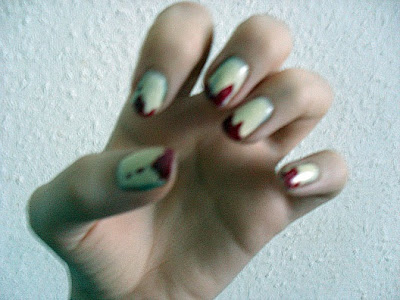 The Grindhoose Cinema, The Zombabe Usherettes getting their faces “did”, my bloody nails – nail art, this is the extent of my skills.

The event had a really organic punk d.i.y feel to it – everything pulled together on a budget of sweet fuck all by some die hard film fans. The atmosphere for the whole night had a community vibe – people wooping, clapping, cheering and the like a long with the films. Yeah…it was pretty awesome.

So what did they screen? First up was Turkey Shoot – which I can only really describe as a futuristic dystopion prison movie with lots of eyebrow acting and a fabulous bitch who rode horses, wore far too much eyeshadow and carried an exploding shot gun. I understand my love for her maybe had me missing the entire point of the film but god damnit if she didn’t make me want to learn to ride a horse. The second film was the Filipino action/comedy film – “For Your Height Only” starring Weng Weng. The film serves as a pastiche of pretty much every Bond movie you’ve ever seen. And it’s ridiculous. Oh the gadgets and their ridiculousness.

Great night filled with great people – and a real must for cinema enthusiasts. While I enjoy the character or the Hairdresser’s would be great to see this in a bigger venue and more of these pop up cinema events in Glasgow. I’d suggest liking Grindhoose on facebook if underground cinema is your thang and you fancy finding out more about these kind of guys.

(P.S for those of you who care – for my nails I used Load (white) and Throb (red) from Illamasqua. It’s still holding out pretty well!)