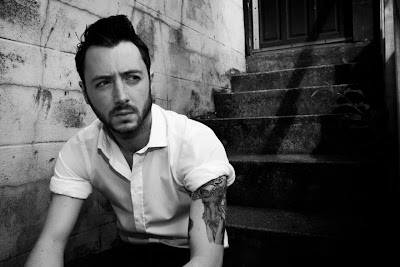 Ten30 are a relatively new label on the Glasgow scene, yet have become fast favourites within Glasgow’s fashion scene. Currently up for Scottish Designer of the Year at the Scottish Variety Awards, I met with Alan Moore to talk politics,ambition and his new collection “The Ukrainian Girl.”

I’ve known Alan for a few months now, and whenever I speak to him, I’m still flabbergasted by his talent and enthusiasm for the industry. With a background in machine embroidery, Alan doesn’t seem to bat an eyelid at spending 60 hours embroidering I dress (me? I near enough fainted) and is always pushing at what ten30 can be . With his previous collections, Tron Girl and Last Tango in Harris – Alan returns to form with prints and shift dresses with his new collection.

So, “The Ukrainian Girl”, what’s the story with that?
Well you know Andy (Robertson), that I work with? Well he writes and he’s very very good at it, so we discussed the idea of coming up with this character and basing the collection around her and all her interests. I wanted this collection to feel more organic. That people don’t have just one set of interests or tastes.

So what is “The Ukrainian Girl” like?
Well we wanted her to have dimension. So sometimes you’d feel sorry for her, sometimes you’d think she’s amazing and sometimes you’d think she’s an utter wank. She’s a 24 year old girl who’s trying to find herself and felt this sort of reflected where the label is, and where we are at the moment. She’s got around a bit and now she’s sort of figuring out her place in everything. Andy and I both traveled a lot and we put a lot of that in to this character. While it may seem difficult to write from “a girl’s” perspective, we put a lot of ourselves in “the girl” and I’m really pleased with the result.

Stylistically, what were your influences for this collection?
Well Chloe Sevigny really embodies what “the girl” is about. You know the sort of people you see, and they just have this effortless style.They just look amazing and we wanted that to reflect throughout the collection.

What can we expect?
I wanted everything to be wearable – so it’s a collection of hareem pants, floaty tops and skirts and shift dresses that seem to have become a trademark cut of the label. There will be bits and pieces of embroidery throughout the collection but I wanted to design some new prints so got some new designs for “the girl.” There are these amazing wax painted eggs that had these beautiful geometric shapes and I wanted to take that bring forward it to the designs. I’ve got some peter pan collars and blazers as wanted the collection to have this sort of easy femininity about it.

In the past year we’ve seen an influx of new designers within Glasgow, what’s been your experience with the Glasgow fashion scene?
Glasgow has just this amazing community spirit. I feel it’s a place where you can really learn your trade and at the same time, people who would ordinarily be your competitors form this support group. Everyone is just so positive and encouraging.

Scottish Variety Awards? Holy Hell – how’s it feel to be up for this guy?
It’s just very humbling. I’m up against some very talented people, including Emma Lamb and Klingatron so to be up against this calibre of artist is just wonderful.

Alan will be showing off his new collection “The Ukrainian Girl” March 12th at the Flying Duck. His past shows have included air acrobatics at the Oran Mor so no doubt it will turn out to be some sort of special. The Scottish Variety Awards will be announced March 19th, so you can still vote for Alan here. I’ll be posting you sneaks of “The Ukrainian Girl” as the event grows closer, but for now – vote for Alan – he’s rather good.