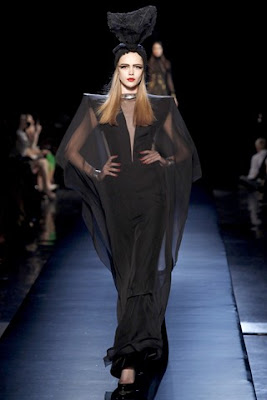 Jean Paul Gaultier Couture always gets my blood a pumping. And the Autumn/Winter line (I need a fall jar more than a swear jar….seriously) of couture is uh-stounding. Obviously I’m quite happy to see the turban feature so prominently….and let’s face it, it’s no secret that I have a soft spot for the sheer, so when I had a wee gander at the photos from the show, I was hard to find something not to like, and harder still not to lust after near enough everything that came down the catwalk.

What I love most about the fall

(20p in the jar…) collection is that it totally evokes that old time Hollywood glamour. I love the tailored waist, the big arms, the fur collars and the feathers. And the turbans…did I mention the turbans? All the looks are very dramatic and to me, instantly iconic. Obvs I love the strong shoulders with the sheer sleeves and the big v plunge. But it’s the turban that makes it. I’ve toyed with the idea of a turban for a few months now….and this, pretty much seals the deal for me. There will be some people who say it’s tacky and a flash in the plan trend. There will be those who say it’s ugly. But you know…so are clogs, and at least my redik fashion choice evokes a sense of glamour…your shoes just make you walk funny. 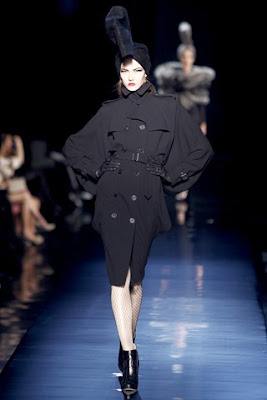 So yeah enough about the turban…the dresses obv are uh-amazing. Very structured, loads of 1940’s silhouettes which is never a bad thing. I love the longer hemline that features so prominently throughout. To be honest though the jackets are the real stand out pieces for me. The black trench number (pictured here) with big billowy arms is def my favourite, espesh with the gloves. It’s timeless. Other favourites were the blue velvet number with rounded off shoulders (something I’m def a fan of) and the goldy/bronzy number with fur trim, which was styled with red tights and a red turban…so uh-yeah, to die for.

The fabrics throughout are very lux….velvet,fur and feathers (really hammering home this whole glamour thing…and of course sheer sneaking in a few times, never failing to make my little heart pound. Also saw a bit of

shearling sneak in if I’m not mistaken. While I feel no one can ever go wrong with a mac at any time of the year….in Glasgow’s winters a shearling jacket might be just the ticket to keep me warm and toasty after a night at the dancing.

Shoulders were a biggy, and although we got angular and feathered, the rounder shoulder was by far the most p

rominent and the shoulder shaping department. I’m a bit funny with anything this rounder in my garments. It just reminds me of those dresses that went out at the hips, and they looked awful. However it’s a different part of the body, and it works here….and I like it, in something other than black…which is a first. 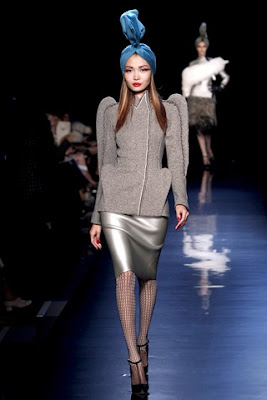 To wrap it up – I love the mix of fabrics-furs,leathers and velvets – and the dark colour palette with flashes of jewel colours of reds, turquoises and greens. I love the turbans, I love the silhouettes….and I also love some of the models smoking when going down the runway…even if it pulls the smoker strings in my lung/heart region a little big. However there is hearsay of Eiffel tower decorated stockings….am I blind cause I am dying to see them.