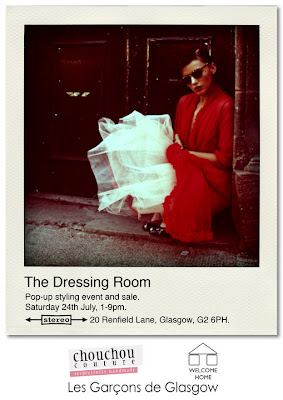 So The Dressing Room was this weekend….a pop-up styling event and sale with some fantastic Glasgow boutiques and designers, as well as Jonathan from les garcons selling those sweet garcons de glasgow tshirts and snapping pics.

Although the event was a little bit hard to find (I was outside Stereo for a couple of minutes looking for a poster or something, all I could see were people dining and was worried I was in the wrong place…but this is more down to me being a fucktard than anything else once I arrived it was worth it. I’m always wanting to find out more about what’s going on in Glasgow and the brands that were there were ones I had not come across before.

The event was organised by Chouchou couture designer Silvia Pellegrino and she did a fantastic job. It has a nice friendly atmosphere, and the stalls that were taking part were all incredible, and very very different from one another. She could be seen grabbing girls to style, sending them to changing rooms with some of the chouchou creations (there was a sparkly rose print fabric dress that was popular….I had to try it on.)

While there I got to find out about some new shops (Welcome Home looks to be a favourite from now on) and see work from designers I’d seen before (ten30 had some gorgeous dresses)…as well as having my hair crafted into a massive beehive by the astounding Ally Mair and trying on some of ChouChou’s creations….my favourite’s were a pair of high waisted beige trousers and a long mesh top. Swoon.

There is talk of The Dressing Room being a regular occurrence, and I hope it is. The stalls were amazing and I feel there is nothing quite like this going on in Glasgow at the moment. Failing that you should definitely check out some of the boutiques that were there!