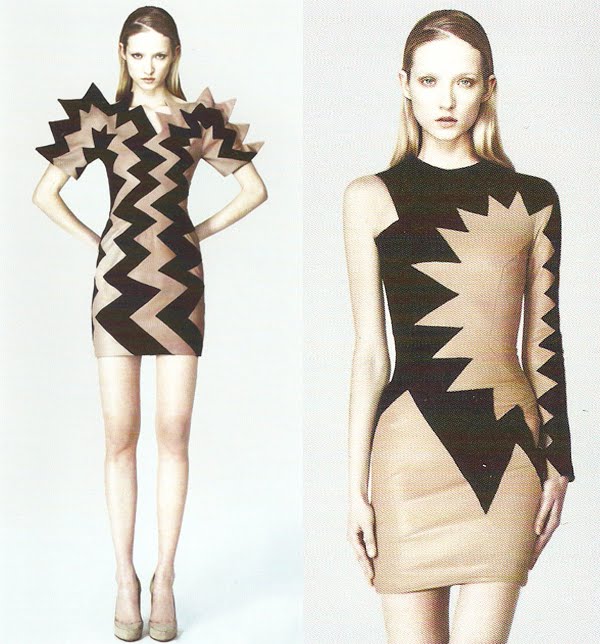 I gotta say….I sure am liking David Koma‘s A/W 2010 Collection. Maybe its the prominence of black within the collection, maybe it’s the mix of leather,wool and suede. Hell it could even be the sharp tailoring throughout. Really though I think it’s the sort of space-age quality that it evokes. I like how the outfits don’t look like they’d be out of place in a sci-fi film (‘m blaming this on the silhouette if anything) but also is wearable and would look just as bitching on a night out.

I’m a sucker for some nice muted colours so the entire collection is up my street. Mixing tan,black and grey it manages to remain interesting, focusing more on the cut and shape of the garment rather than bright colours.With leather coming back and by the looks of it shearling going to be fairly big over Autumn/Winter these nice homey colours look like they’ll fit right into my Winter wardrobe a treat.

I’m dead into the shapes as well. They are very powerful and strong, and the embellishment with the zips, evocative of teeth-and some Emma Cook shoes that were kicking about last year, and the geometric shapes running through the line keep it interesting and draw the eye in.

What I’m really trying to say is…it’s dead good. I mean truth be told I’m not crazy about the zips in garments…I think they look way better on accessorise, but the zig zag print and the colours…yeah I’m totes on board with.

Let me ‘spain…no there is too much, let me sum up. I’m in love with the colours and the geometry that runs through the entire line, the zips…..I like as a concept but maybe not the way they’ve been shown here. I think it looks a little cheap. As a hair-band or bracelet maybe though……hell yes.