Alber Elbaz: artist director of Lanvin. Apparently this man can see into my very soul – because the Lanvin A/W collection is fucking amazing 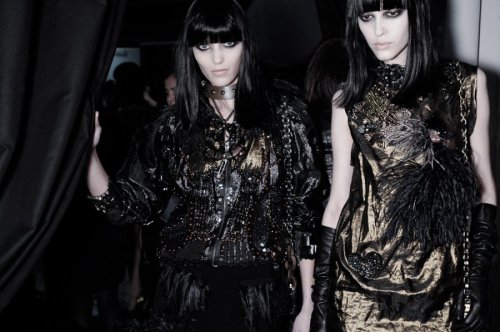 Of course maybe I’m just saying this because the models themselves look so striking…sent down the catwalk in black wigs with blunt fringes, dark eyes and pale lips. Elbaz – a man who loves the individuality of the women was curious to see how the girls would look the same in a time when people are going for “the same lips, the same dress”. I think it looks fantastic and I feel that here the uniform dark hair and dark eyes only serves better to showcase his designs.

There is a lot of angles in this collection , especially in the shoulders which sort of echoes the idea of power dressing…..and there is A LOT of black, which suprise suprise I’m okay with. In an interview with Dazed Digital Elbaz spoke of how for A/W he decided to use a lot of streach fabric and was “scared the clothes would be too architectural and I don’t want women wearing houses.” The big shoulders were made with a build up of fabric opposed to the more traditional method of shoulder pads. 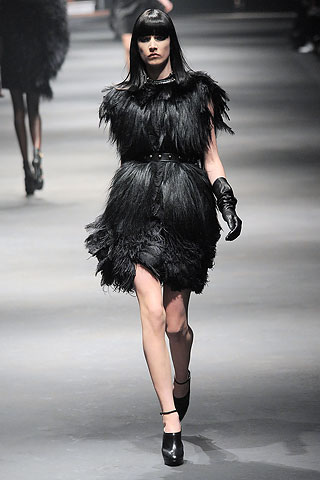 The collection is taking influence from the idea of African Winter in a hyper-fantasy version of what African Winter would be like. From there we see a strong tribal theme coming through and the garments are moe constructed than draped working with primary cuts. Elbaz spoke of how the look needed to be relevant for today in a society that is “strong, sometimes agressive and moving forward really fast” – which is evident from his entire collection. There is throughout the collection statement jewellery, mettalic dresses and feathers.

What I like about the collection (other than black being the dominant colour obvs) is the feathers. The way it moves, it just looks very decadent. He has taken tribal and made it very glamourous in a collection which is domimated by day wear. The girls looks amazing and everything looks very strong and tough…though the feathers seem to definitley give it more of a feminine edge. Continuing the theme…I’m over Spring…I am SO ready for Winter.